Now that I have Scavenger up and running on the ODROID-XU4, it’s time to do a little optimization to see how much I can really get out of it.

For this I’m going to use 1.6.0 from the releases page. Download Source code(tar.gz). The development team has some really great information on all of the configuration options on the github wiki, so make sure to check that out if you’re going to try this on your own device.

First and foremost, I needed to make sure I had Rust installed in order to compile. In the terminal run the command:

This shows that I already had Rust installed and it was version 1.28.0. I also wanted to make sure I had the latest version, so the next command would be:

Apparently the first time I installed Rust, I didn’t follow their recommended procedure of using rustup. To FIX that problem, first I had to uninstall the current version of Rust, so that I could re-install the recommended way. Information on installing & uninstalling Rust can be found here. 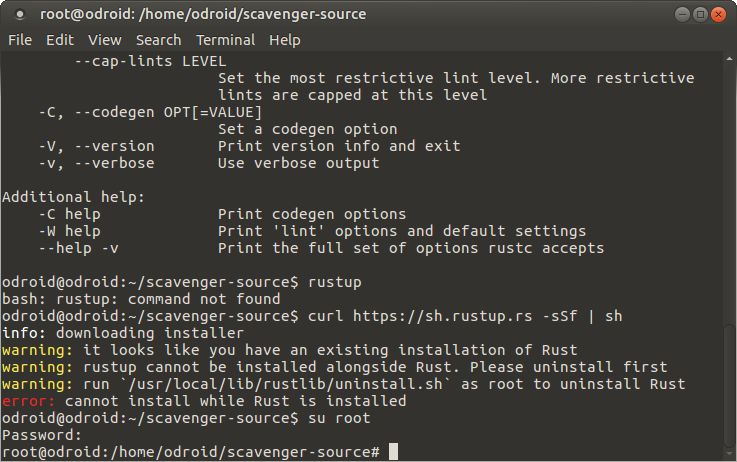 Another problem: it looks like you have an existing installation of Rust. So I uninstalled the previous version. 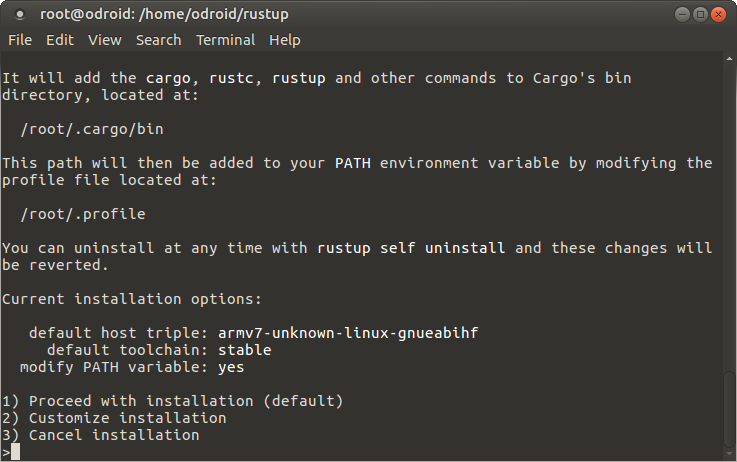 This worked as intended and installed all of the files needed. 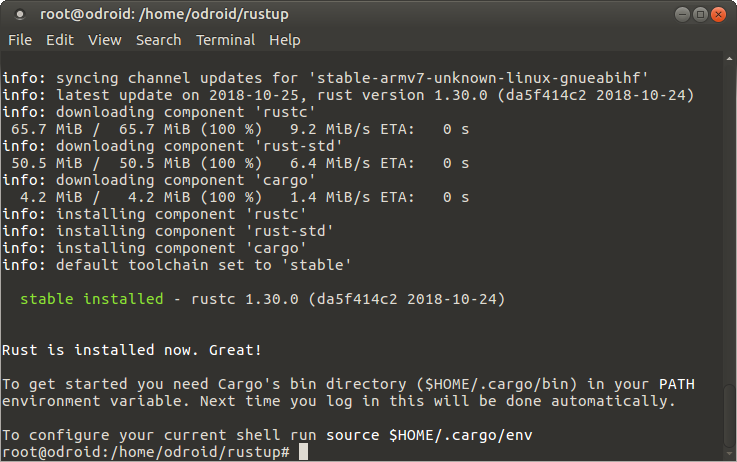 At the end of the installation it tells you that you can immediately register the command to your PATH by entering the following:

I did NOT do that, but closed and re-opened the terminal instead. After that, to make sure it was all installed correctly, type:

This gave me rustc command not found! It must not have added to my PATH, right? I manually added it in by opening up the /home/odroid/.bashrc file and added export PATH=$HOME/.cargo/bin:$PATH to the end of the file.

The above command makes the change in .bashrc immediately available. So now, I tried again.. and again rustc command not found! What’s going on here?? Next I checked out the /.cargo/ folder and lo and behold.. no /bin folder. That’s not right.

As it turns out, back when I uninstalled the previous version, I swapped over to the root user and installed as root. That made Rust unavailable to my odroid user. OOPS. If YOU do this, uninstall that version and try again.

As the odroid user:

I now show that Rust is installed again, the same as before.. but now it’s installed for the correct user!

Now I copied the 1.6.0 source over to a “scavenger-src” folder and started the compiler. (I did this via Ubuntu to avoid command line stuff) 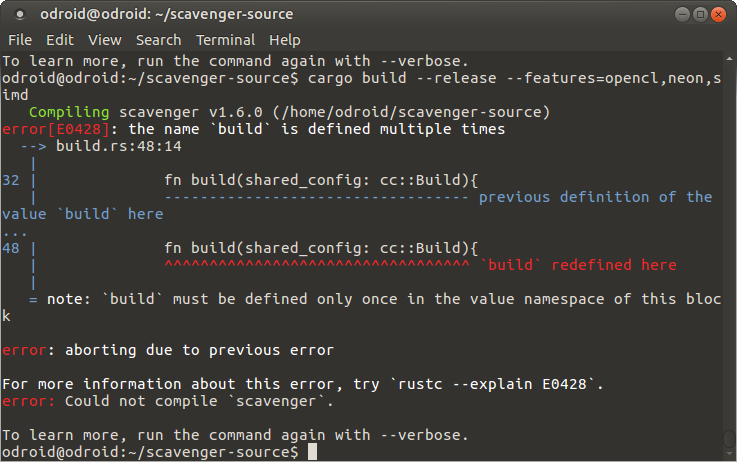 That’s apparently not correct, since it gives an error that the build function can’t be used twice. Looking at the config file, it looks like you can’t have neon and simd as options at the same time, so I removed simd.

That went through 192 of 193 compilations before it finally failed. 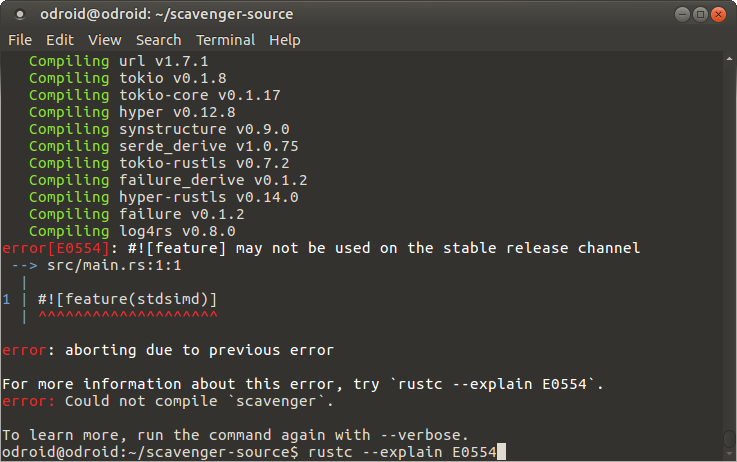 #![feature] may not be used on the stable release channel

This is because the stdsimd library is not labeled as “stable” and so it can’t be used in the “stable” version of Rust. The fix? Use the nightly release of Rust. See this link for more information. 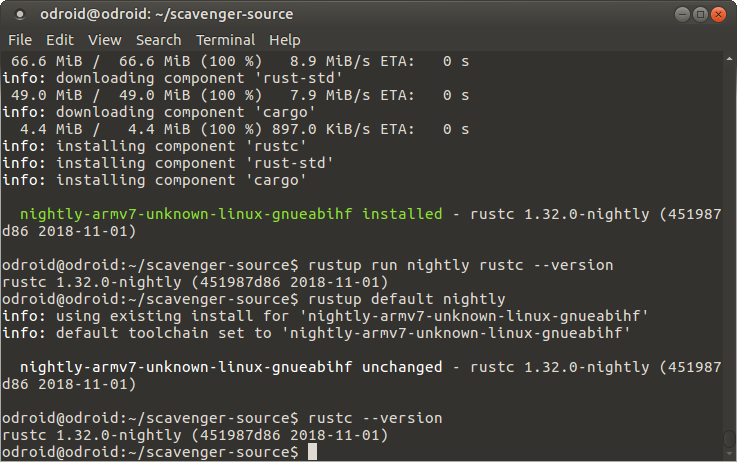 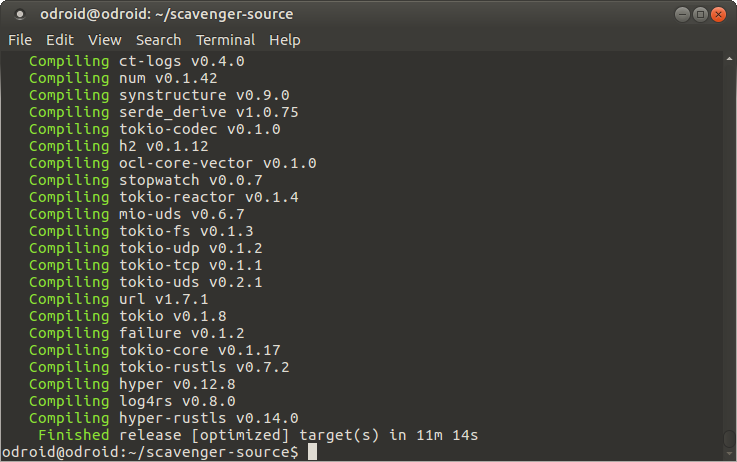 Compiling again with cargo build –release –features=opencl,neon finally made it 100% through the build. I now have a working NEON & OpenCL Scavenger!! Right?? Wrong :(.

Unfortunately, it looks like OpenCL is indeed compiled in, but there’s an error

error: panicked at 'attempt to multiply with overflow', src/miner.rs:285:17

This is above my pay grade, but I hopped on Discord to see if anyone else had these errors and/or a solution. Lucky for me JohnnyDeluxe was on and he has his own ODROID to test with. He started taking a look at the problem right away. Nice!

My Ubuntu version was a bit behind, so I decided to upgrade to Ubuntu 18.04. Hardkernel has an image for it on their site but I decided to do it through the Software Updater under System > Administration > Software Updater. This took a while to complete, and actually failed according to the updater, but restarting showed that I was indeed running 18.04 now, so I’m calling that part a success!

I tried Scavenger again after this and it still gave me that same error. Wah wah waaaah.

Johnny was able to find the problem!! It turns out that one of the variables needed to be cast to type u64. I downloaded his new version 1.6.4 and tried it out. Compiling with the following: 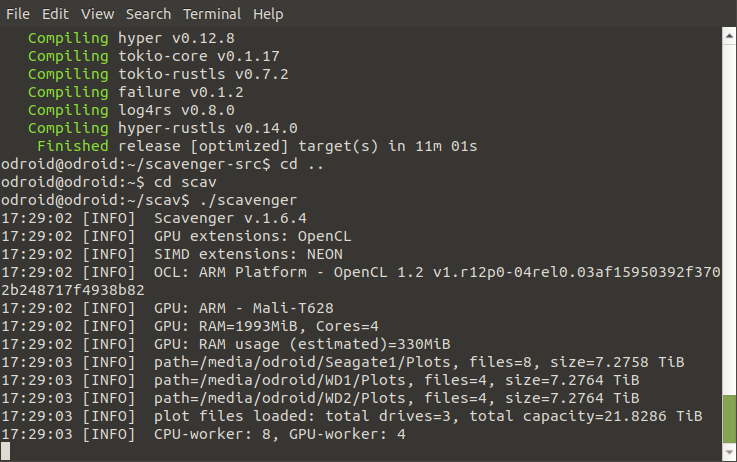 I set my config.yaml settings:

The ODROID-XU4 actually has a Mali-T628 MP6 chip, which shows as two separate devices. The first with 4 cores and the second has 2 cores. Since I’m using device 0, I’ve entered 4 for the gpu_worker_thread_count.

And it’s off to the races!

These tests show that with OpenCL, it’s now the I/O that is the slower of the two and reading is more of a problem than computing. OpenCL seems to add a decent boost and knocks a few more seconds off of total round time. Now it will be about optimizing the settings to try and get closer to the 232MiB/s bottleneck. I may be able to do that by boosting the hdd_reader_thread_count.. but that’ll have to wait. My kids are in full spaz-out mode so it’s probably time to give them some attention!!