On October 8th, Scavenger 1.6 was announced, which is pretty exciting for us miners using Linux on a 32-bit ODROID-XU4! Not only does the 1.6 update add support for 32-bit machines using ARM7, but it also has NEON support! Scavenger 1.6 can be downloaded on the PoC-Consortium GitHub page here.

Version 1.6.2 was released on October 28th, but it looks like if you’re NOT using AVX512f, which is only available on newer Intel machines, the developers recommend staying with version 1.6.0

Previously, I had started a little work on a few projects that might have sped up my mining rig, including porting Blago’s miner, adding NEON support to creepMiner and porting the original Scavenger to a 32-bit version. I had even started building my own miner in C++, but only gotten as far as setting up a decent system for terminal output and cURL based comms. I just haven’t had the time to get back to any of these projects due to my day job keeping me busy. Anyway, long story short — it looks like the PoCC folks have added JUST what I’ve been after!

If this miner truly does show a decent improvement, I may (if funds allow) be able to add on some extra drives to the lil’ ODROID system.

Looking at the wiki page for Scavenger, they only have Raspberry Pi and Android focused builds. Do these apply to the ODROID-UX4? Running the following command via the terminal gives a little info:

This is just the last processor. there are 8 cores in the ODROID-XU4 and they’re all listed here. You can see that it may work with the same build for the Raspberry Pi 2/3 that they have listed:
– scavenger-1.6.0-armv7-unknown-linux-gnueabihf-cpu-only.tar.gz – e.g. for Raspberry Pi 2,3

Let’s start by downloading that version and testing if it will work on the ODROID. The link is on the releases page under 1.6.0 and it’s labeled scavenger-1.6.0-armv7-unknown-linux-gnueabihf-cpu-only.tar.xz.

Decompressing the package reveals two files and a test_data folder.

The first thing I’m going to do is look at the config.yaml file and update it with my info.

I am not solo mining at this time, so it’s safe to remove the first three lines:

Next, I’ll include my plot_dirs:

Note that I’m keeping the ‘test_data’ line, but commented out. I may come back to this later. It looks like they have a small test plot to make sure compiled features work.

I’m going to set up the url parameter to point to the pool that I’m using. If you have questions about Pools and Reward Assignments, head over to the Burst Wiki Page on the subject. For my settings, I’ll use the 0-100 Cryptoguru pool: 0-100-pool.burst.cryptoguru.org:8124

After that, I’m going to skip down the config file a bit until I come to the target_deadline piece. I’m going to update that with the recommended TD from the Bust Pool Quick Info tab. At the time of wring this, if I enter 21TB I should have a target deadline of 7717889. This should give me a good starting point. It would however be nice if Scavenger had a dynamic target deadline option.

The rest, I’m going to leave as defaults. Here’s my entire config file:

I kind of expected this to fail… since I haven’t had great luck with anything but creepMiner 1.7.18 lately, but YES it works “right out of the box”. Despite a stall at the start (which I’m attributing to the hard drives waking up) it’s all looking pretty good! 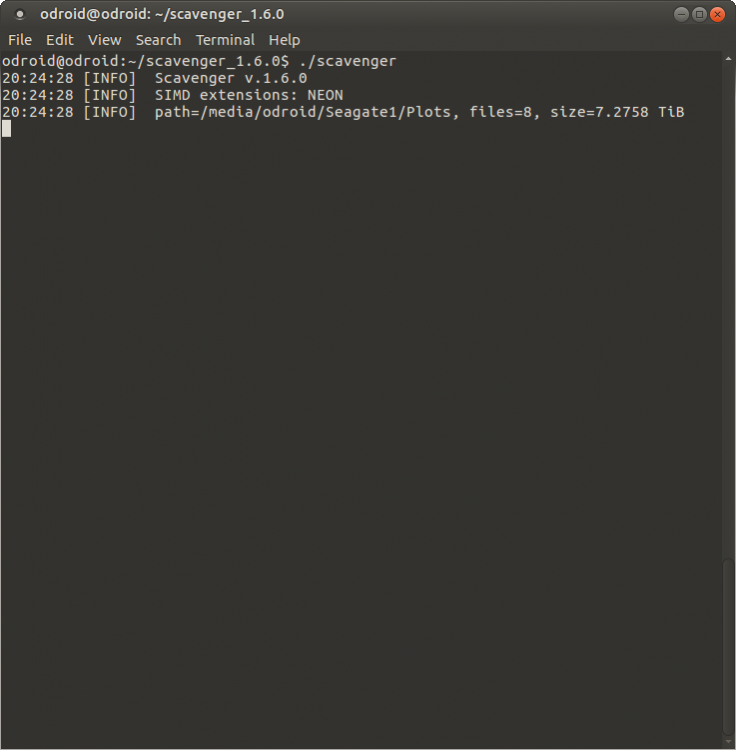 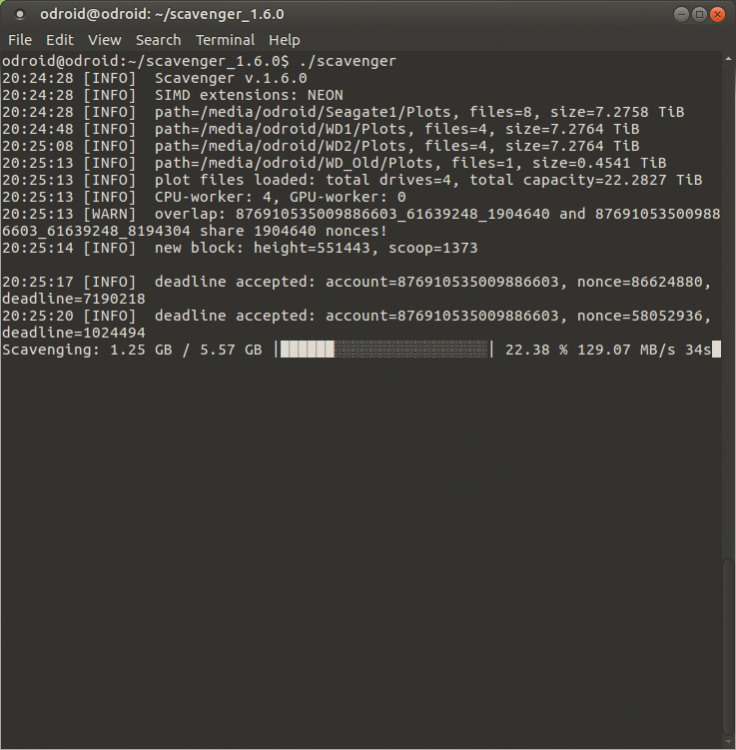 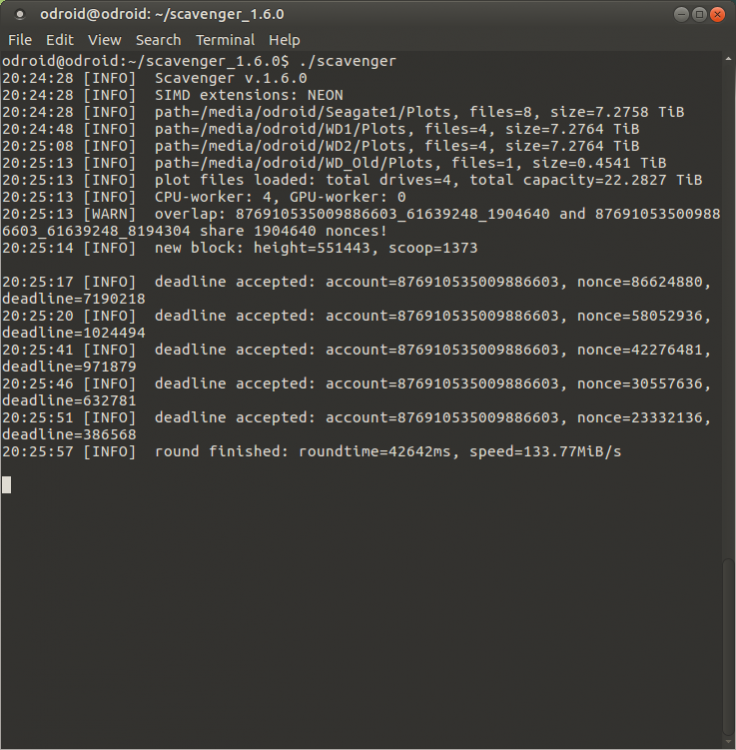 I like how they’re pointing out both the speed for each plot file and the total speed. You an see from the screenshots above, that my total round time is 42.624 seconds, which is below my goal of 60 second AND below the average with creepMiner (72 seconds) by quite a bit. This is looking VERY promising for adding additional drives to the ODROID-XU4.

I’ve run a few more rounds, and the total times & average read times are as follows:

That’s the first 10 rounds, and it’s important to note that even though none of the round times match the first one so far in terms of that 133MiB/s speed, they’re fluctuating up and down a bit. I would attribute this to which sectors on the hard drive are being searched.

Looking up that block on the Block Explorer, that make sense. The block generation time was 39 seconds, so it stands to reason that between my 3 second polling of the pool wallet that the block was won by someone else.

I’ve been using creepMiner ever since I set up the ODROID (see this article) and have been in constant search (when I have time) of something that might allow me to expand beyond the 4 external drives that are on there now. Even with OpenCL (see this article), the creepMiner setup just can’t read and process the scoops at the speed of Scavenger. creepMiner version 1.8 is even worse, since Creepsky added in some logging features that a single board computer like the ODROID-XU4 just can’t keep up with.

There may still be some room for adjustment in the settings of the miner. Looking at my resources on the ODROID, I still have some CPU and memory to spare. If anyone reading this has tried different settings, go ahead and post them in the comments below and I’ll give them a try. 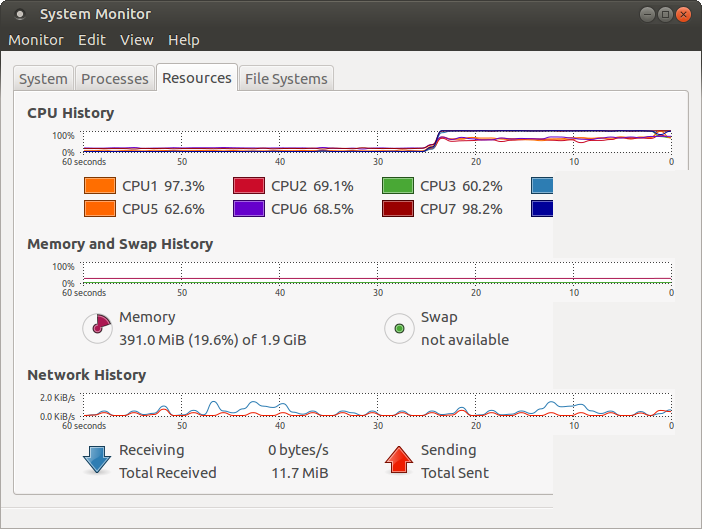 Update: Changing the cpu_worker_thread_count to match the cores on the ODROID sliced even more time off of the rounds. They’re now consistently around 39s, which is aaaaalmost a 2x increase from the best I could achieve with creepMiner.

The overlap check also alerted me that I’m an idiot and overlapped my last plot on the USB2.0 drive with one of my earlier plots. I removed that from the system for now. It didn’t seem to speed up the round too much. I wonder if it already ignores overlapped plots, or if it’s just a warning.