The old 500GB Western Digital My Book (USB 2) finished converting from the PoC1 format to PoC2 in 7 hours, 24 minutes. I don’t know why exactly it took so long, but now it’s time to add it to the ODROID-XU4 Burstcoin miner that I have set up.

The first step will be to download and compile the new creepMiner that’s compatible with PoC2 plot files. I’ll be using the 1.7.18 version, which can be found at https://github.com/Creepsky/creepMiner/releases.

Because I don’t want to halt my current mining operations, I’ll download and compile this into it’s own directory. The default folder is “creepMiner_1.7.18” which will work fine for this.

First, open a terminal in Ubuntu via Applications→System→MATE Terminal. This puts you in the home directory for the ODROID. Because I don’t want the 1.8 version of creepMiner, I went and downloaded/extracted the 1.7.18 version via a browser & unzip. 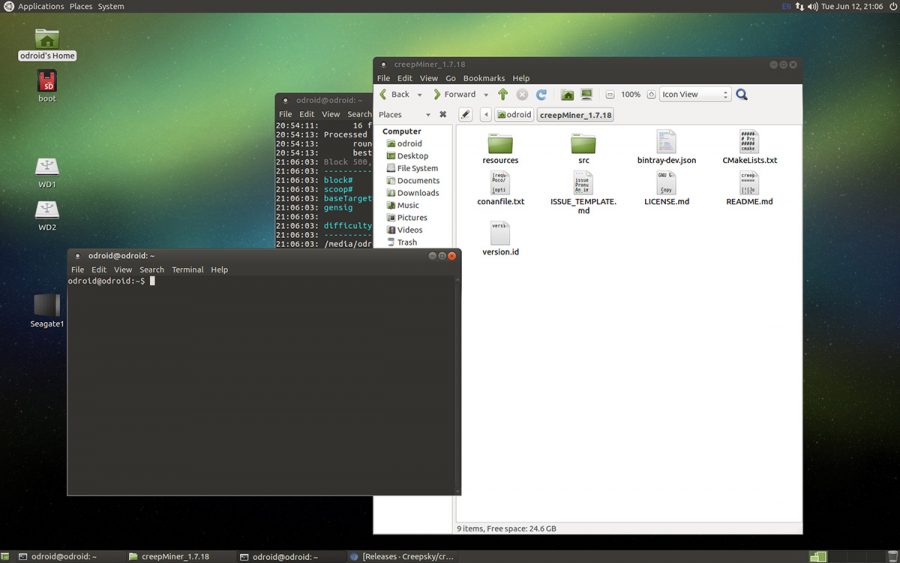 From there, run the following commands: 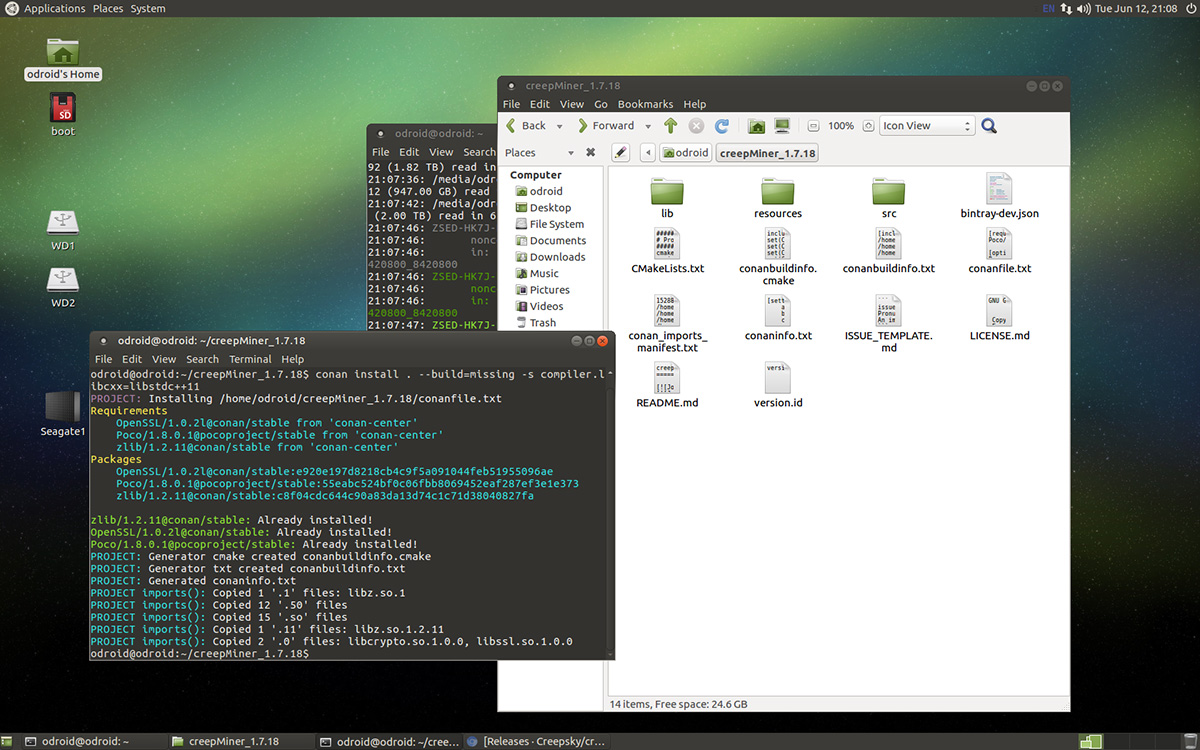 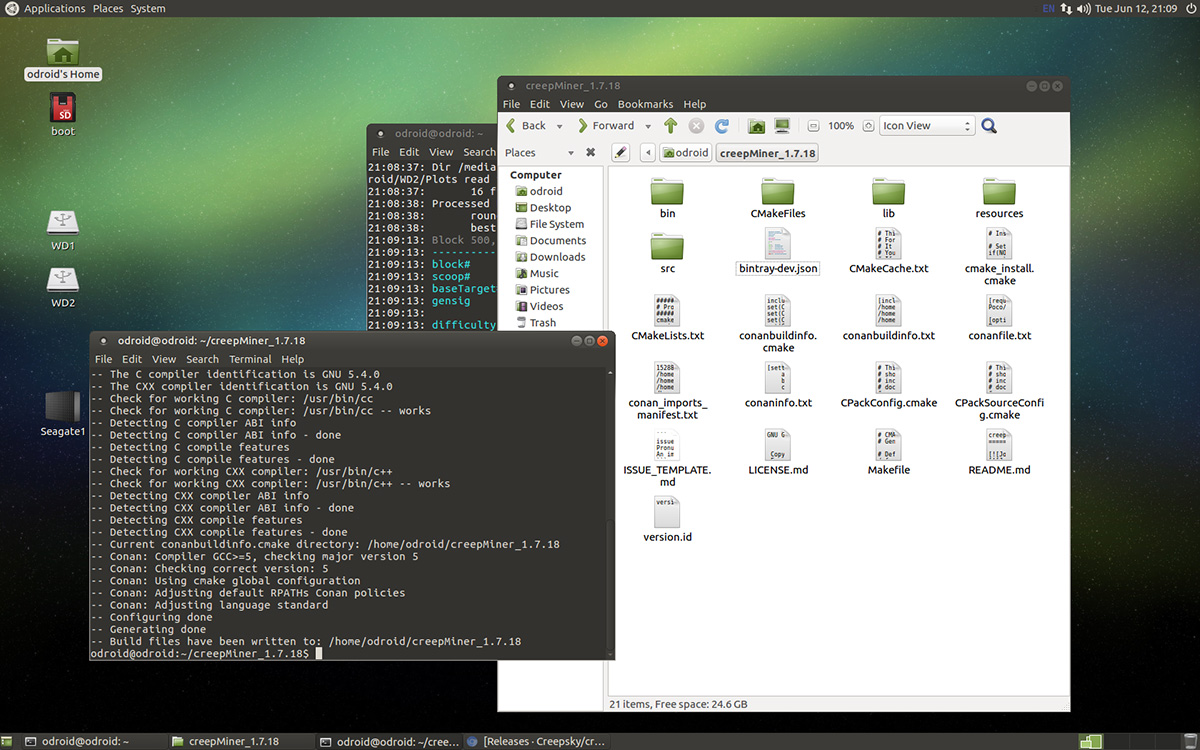 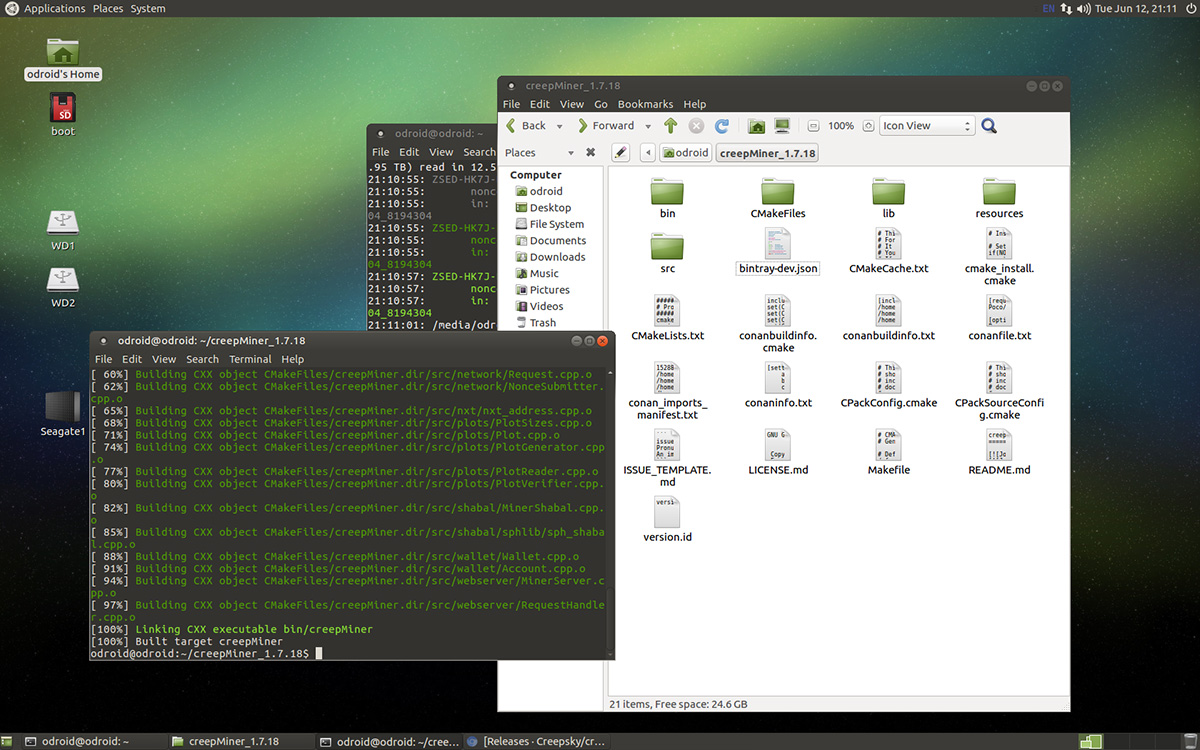 This went off without a hitch, and now I end up with a new executable in the /bin folder.

Because I’m lazy, and I want to add this as my default version of creepMiner, the next step is to show hidden files via View → Show Hidden Files. That will reveal the .bashrc file in odroid’s home folder. Edit that file and add this to the bottom:

Save that, then make Linux aware of your change in the terminal. 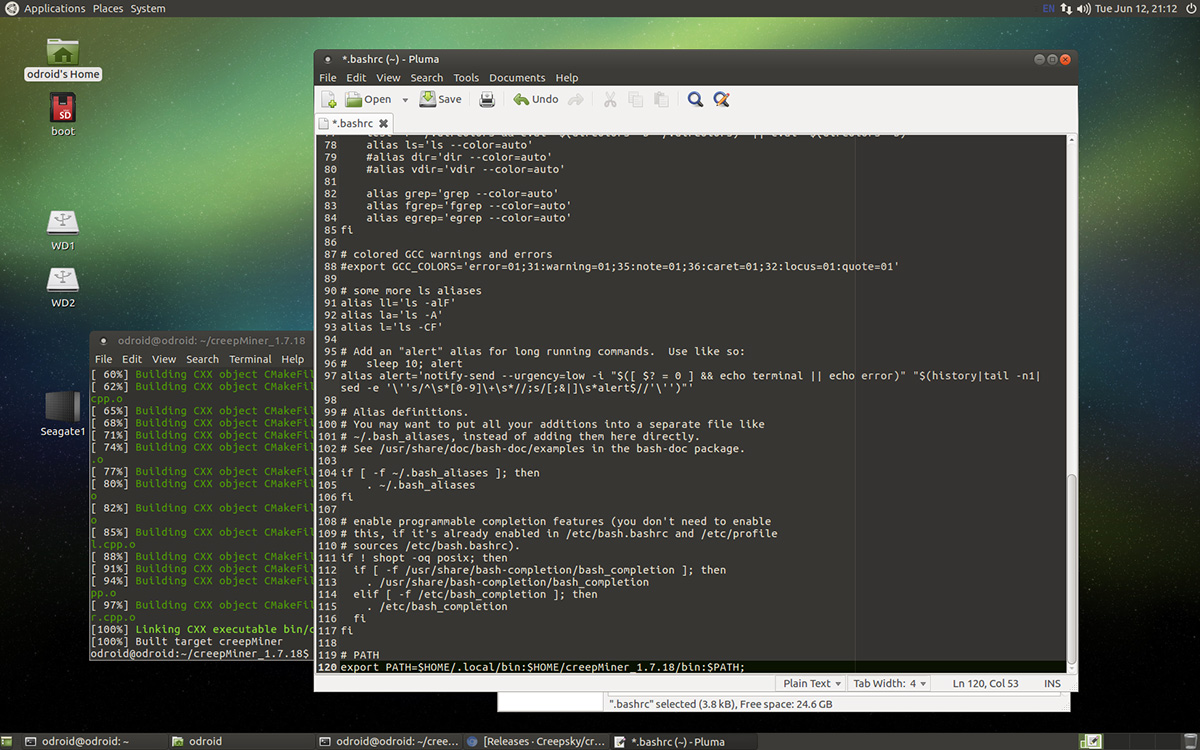 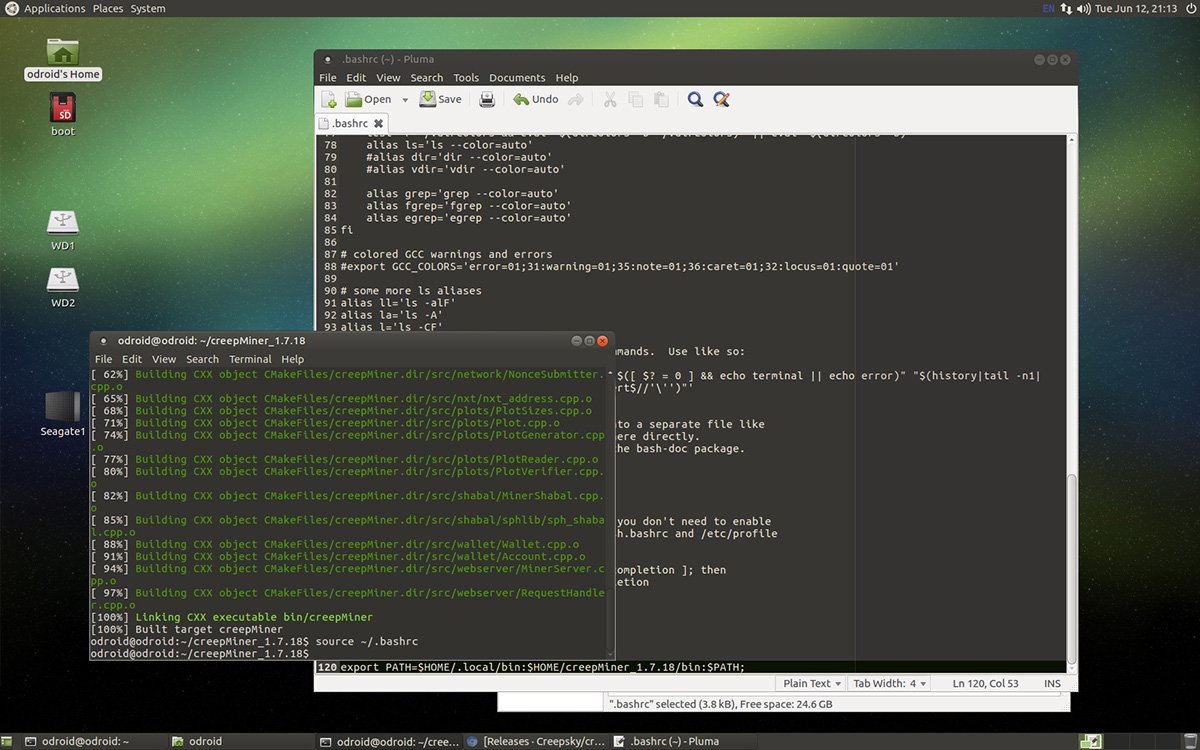 Now I’m all set up to run the latest version of creepMiner. I stopped my currently running miner and started the new one!

Oops! For some reason creepMiner decided it didn’t want to read my existing config file, so I copied it into the creepMiner_1.7.18/bin folder along side the executable. After that, my warnings went away and I was able to verify that creepMiner would run, and run the right version. 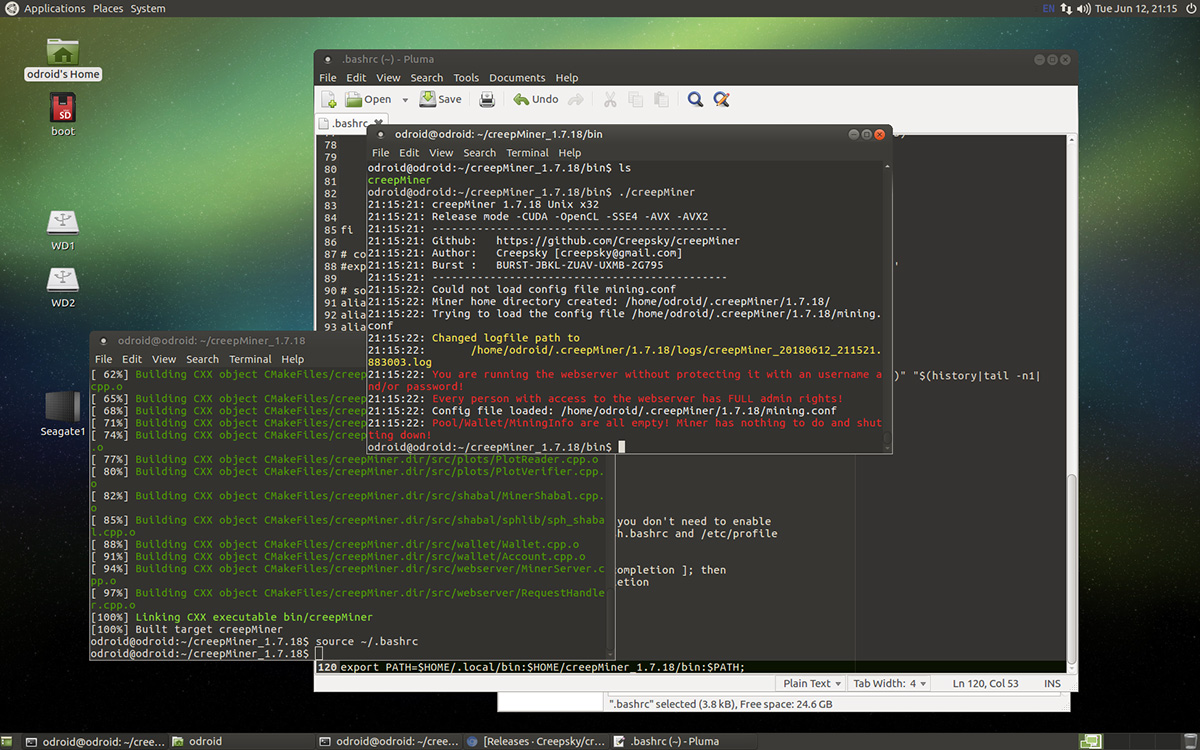 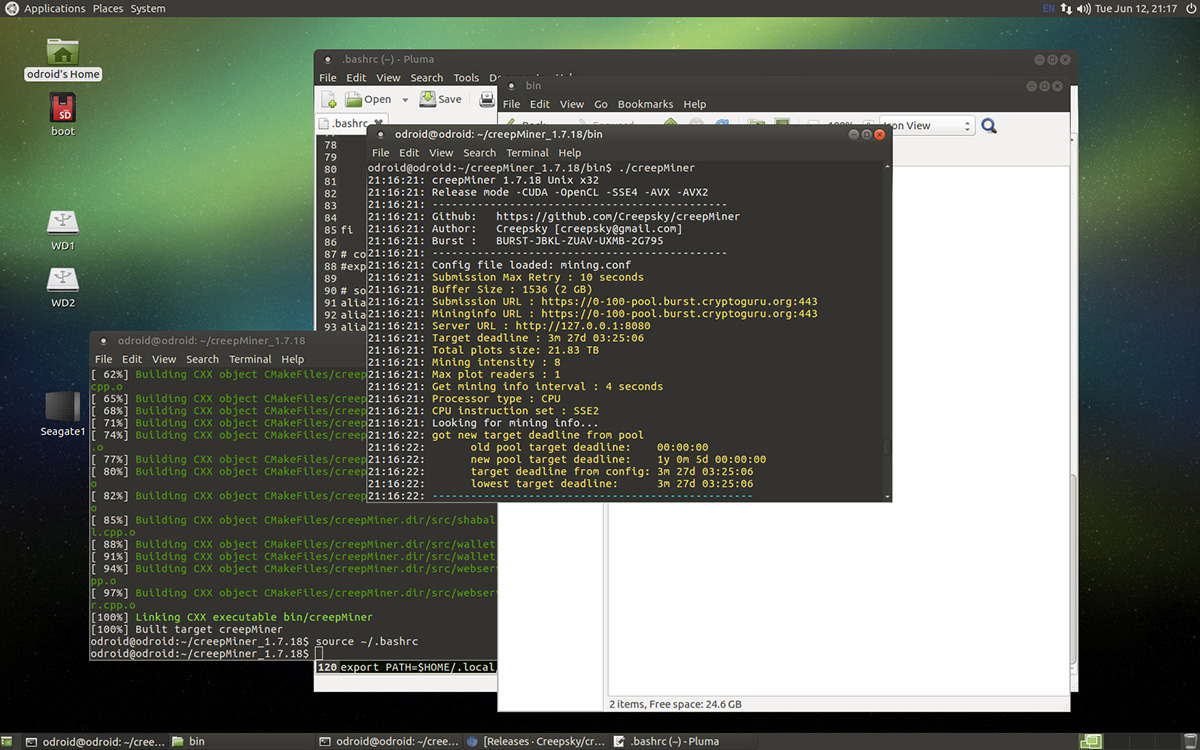 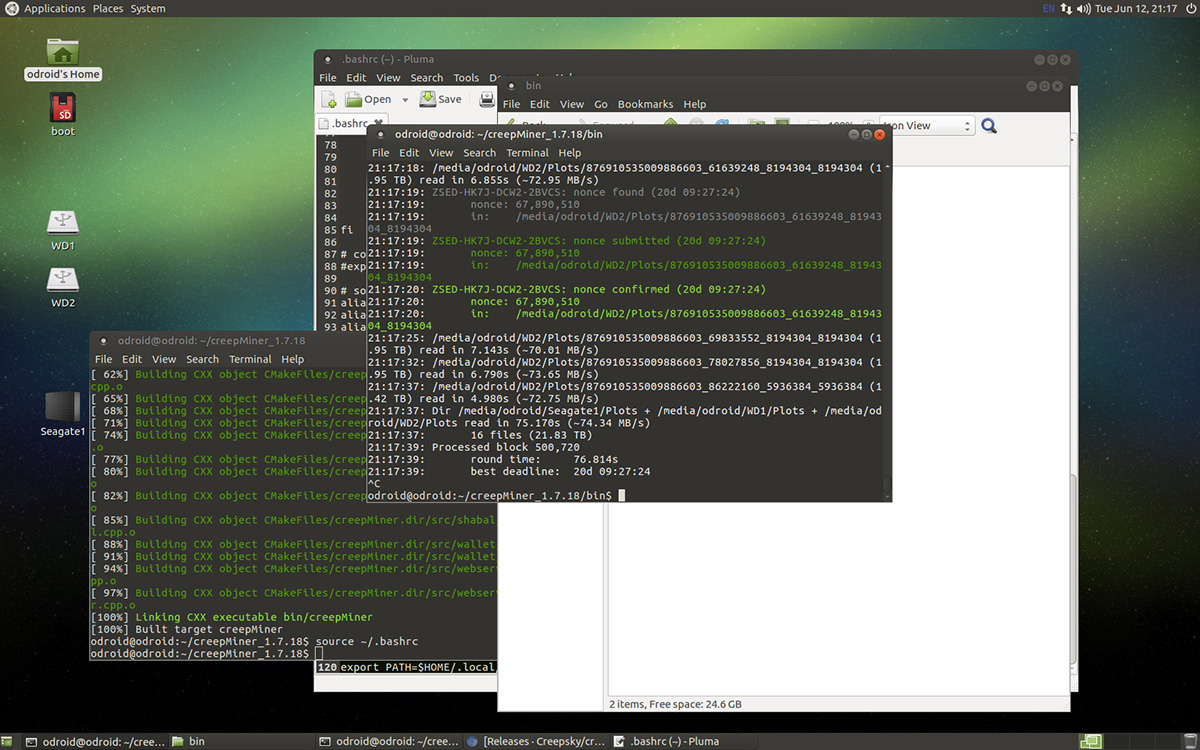 Alright! Now we’re working. Time to add in the hard drive with the plot that was converted from PoC1 format to PoC2 format via JohnnyFFM’s converter. Open up the mining.conf file and add in the “media/odroid/WD_Old/Plots” line in my path configuration. 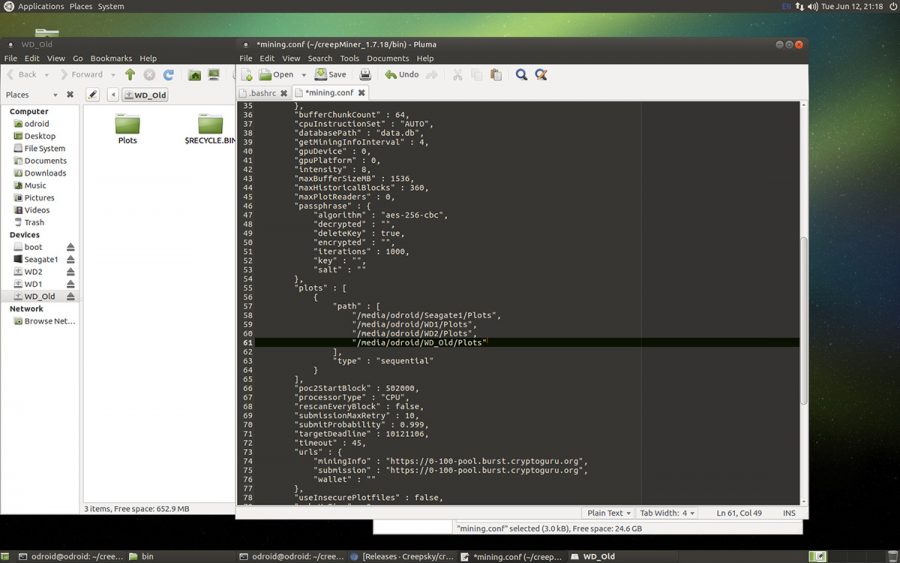 Once that’s added, time to start up creepMiner again and verify the results. 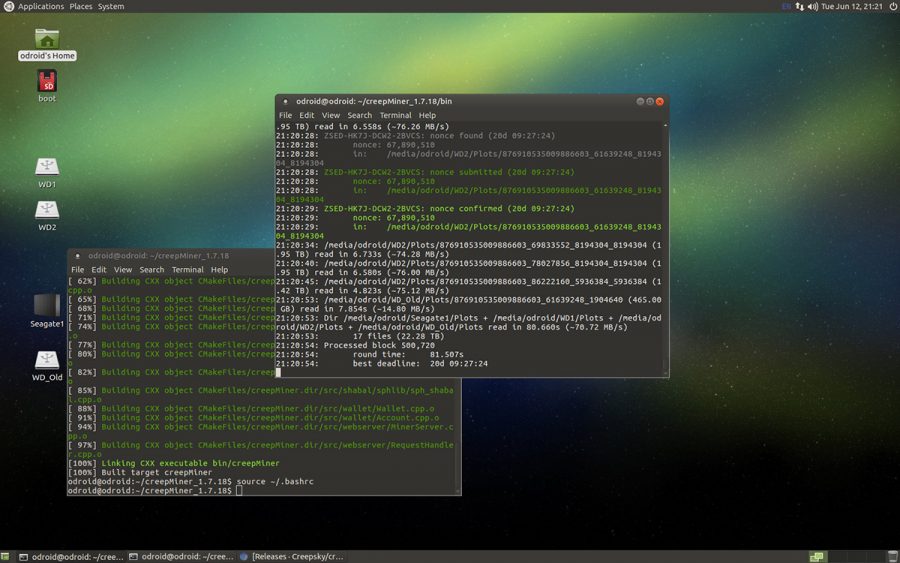 Note that at this point, the 7.654s @14.80 MB/s is roughly twice that of the plot file when it was formatted with the PoC1 format. This is temporary until the 502,000 height block which enables PoC2 for the consensus protocol because the miner has to read it in a compatibility mode until then.

So, next up will be converting the rest of my plots. I have two 8TB Western Digital My Books (Amazon) and one 8TB Seagate (Amazon) left to go. Judging by the conversion time on JohnnyFMM’s converter, I’m looking into options here. If one WD drive takes 30 hours to straight plot, vs. a much longer (double?) conversion time it might make sense to just re-plot instead of converting. On the other hand, the converter can handle multiple drives at once, so it may be faster to convert 3 at a time.

Stay tuned for results on that!